In 1 Chronicles, the genealogy continues… But in Acts, there is quite the uproar :)

But let’s not get ahead of ourselves…

This passage begins by outlining Paul’s travel itinerary that will comprise the rest of the book of Acts. He “resolved in his spirit” to visit the churches in Macedonia (Philippi, Thessalonica & Berea), then of Achaia or Greece (Corinth). He then planned to return to Jerusalem and ultimately, Rome (Acts 19:21).

Then the passage returns to events occurring in Ephesus. It would seem that Paul’s ministry was hurting the business of the idol-makers. One specific silver-smith, Demetrius, was especially perturbed, so he decided to assemble his cohorts and accused the disciples of slandering the “great goddess Artemis.” This small assembly multiplied into a riot – with all the crowds piling into the great amphitheatre and shouting for TWO HOURS, “Great is Artemis of the Ephesians!”

Oh my. Now, let me interject… I’ve been to Ephesus. I’ve sat in this amphitheatre and let me tell you…this isn’t some quaint outdoor theater! This place is HUGE. As I sat in this theatre, I imagined the mob – screaming for two hours. It’s hard to imagine how loud it must have been. The whole city would have heard, for the amphitheatre was close to the main thoroughfare of the city. 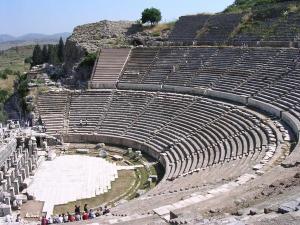 Paul wanted to go to the theater. Who knows why! But, thankfully, the disciples prevented Paul from going. We learn something about Paul’s character. He was no coward, that’s for sure!

Here’s what’s cool…. Do you remember what the mob was screaming about? That’s right…Artemis, the goddess. Have you ever heard of this goddess? Does she have any influence over your life? Did she change the course of history?? I didn’t think so.

The mob can scream all they want to – the fact is… the city of Ephesus and their precious goddess, Artemis, are in ruins. But Jesus, the God of creation and of all of history – stands forever.